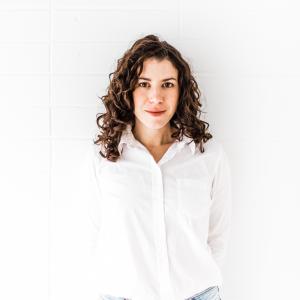 Rachael Speirs was born in Oakville, Ontario and raised in Toronto and Cambridge, Ontario. As a child Rachael honed her painting skills through copying traditional childrens story book illustrations and admiring the embroidery work of her grandmother. She stole scraps of fabric from her mother sewing, filling her spare time with making and creating. Rachael would submerge herself into nature or a piece of music, allowing her imagination to run wild. As a self-taught artist, Rachael looked to her childhood picture books and her grandmothers embroidery work for inspiration and to practice her skill. As an adult art never left her. Rachael’s creative inspirations include Carson Ellis, Kate Bush, Shary Boyle, Frida Khalo, Amy Cutler and David Blackwood. Although she worked and studied Social Work, she maintained her love and passion for art. Rachael’s education and working career in social work is reflected in the humanitarian elements of her work. Her pieces will forever showcase her need to share a human experience and to connect with the viewer. Rachael exhibited her work for the first time in 2010 and has since participated in multiple exhibitions and received multiple awards and grants including best mixed media at Riverdale Art Walk, top 5 installations for DesignTO and has received grants through the Ontario Arts Council and Toronto Arts Council.

Ill Just Cut It Myself

A quiet place where thoughts can be thunk

Why is it important for people to have art in their home or life?

It enriches our world. Having art in our home is a way of reflecting our values and the depth, richness and beauty of the world.

The Snow Child by Eowyn Ivey. Incredible story that is fairly unknown.

Why is art important to you?

Art allows me to express the multitude of jumbled thoughts and feelings and make sense of them in visual metaphors.

When did you start making art, and why?

As a child, I had long stretches of solitude and alone time. I filled that time with expressing myself in artistic and creative ways and used whatever scraps and materials I had at my disposal. This includes scraps of cloth from my mothers sewing and renovation and building materials as canvases.

What artists do you admire right now?

Ill Just Cut It Myself

Oakville
Oakville Art in The Park

One Of A Kind Show
New Artisan Grant

Try-before-you-buy with a 3 month rental. 100% of your rental payments go towards the purchase (interest free). Message the artist directly, and start the conversation.

We make it easy for you to try art with smart payment plans and try-before-you-buy models.

See How It Works

Artwork protection is included on all art rentals up to $5K. Our Customer Care team is always here to help.

1% from every transaction goes towards a Canadian arts nonprofit.